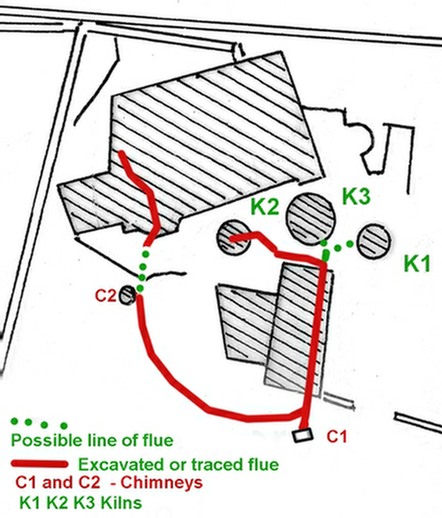 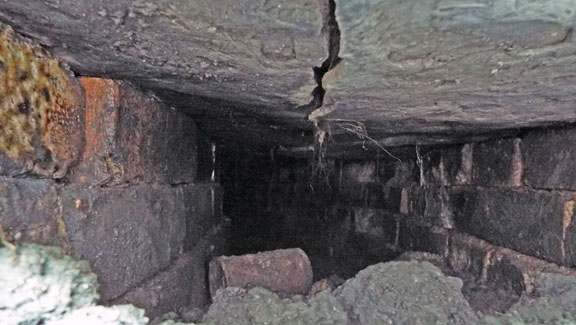 The works consisted of 3 kilns (1 large and 2 small),  counting house, moulding sheds, steam engine and boiler together with water wheel and associated machinery, The kilns were round and assumed to be of the traditional style with firing holes and access openings at ground level (see Starring Pottery for examples . Salt was added to provide the glazing on the tubes and bricks.

An advert in Rochdale Observer 4th March 1871 - to let untenanted Pottery Sheds, kilns and other buildings belonging thereto. Another advert 6 months later included the Pottery as well as valuable clay and coal mines. It would appear that thee was no response to the previous adverts and on 20th September 1873 it was announced “to Tile and Fire-brick Companies, Mortar Mill Proprietors, Builders others” instructions to sell in the occupation Mr Harry Magson the under mentioned effects:-

Clay Grinding machines with basins, 2 crushers, 6 ft 10 inch Water Wheel complete with shafts and gearing etc with other items of plant and tools together with office equipment.

The is no detailed plan on any Ordnance Survey Map but above is a site plan based on a local  estate map. It indicates the location of the various elements including a large workshops (partly dug into the hillside and situated partly on the site of the lime kilns) and the 3 kilns plus associated flues and chimneys. The waterwheel was located at a higher level approx between C1 and Kiln K2.  TOP

Throughout the excavations there were bricks with ‘Blackstone Edge’ imprinted on them, many in extremely good condition - see below. The pottery,  made a wide range of items including pipes of various sizes, chimney pots and the items pictured below. These heavy ceramics (refractory items) were most certainly  made in a mould as internally they show the finger prints of the workers (possibly children or women) who made them on the sides and the interior strengthening structure. Their use is unclear but it is thought that those shown in the centre photos and sketch were intended for the top of a chimney . The other may have had a similar use or be part of a fountain base or similar.                         TOP