The Turnpike Trust of 1759 was empowered to link the Rochdale to Halifax with the Reddyshore Scoutgate Packhorse Road at Doghills (now known as Dean Head) and included taking over an existing track from Townhouse. The Reddyshore Packhorse Road climbed up and over the hillside to avoid the Summit Gap. The road was certainly in operation in 1786 but it was probably in use much earlier and went via Higher Calderbrook. During the 1790s, a committee was formed to seek improvements which resulted in the current road via Smithy Nook and Salley St being finished in 1799. The Todmorden Act of 1800 restricted the placing of toll bars which meant that there would be a gate at Doghills but this reference may well refers to a small relocation of the toll bar following the opening of the 1799 changes.  The power of the Trust appeared to have lapsed after the Steanor Bottom to Littleborough Turnpike Toll Road was finished. See sketch map opposite.

Features along the Turnpike

It has been suggested that there was a toll bar at The Dog and Partridge (which became the Caldermoor Pub and is now a hairdressers etc). This would be logical as Shore Road in those days led to Wardle and Whitworth but other documentary evidence suggests none was permitted. Beyond the junction, Calderbrook Road continues to the bottom of Clough Road where it commences the steep climb to Calderbrook passing the cottages of Lower and Middle Newgate and once over the top, Handle Hall. The hall was built in 1610 and was originally called named ‘Warcock Hill’ but became the Queen Ann Inn with an early reference being in 1818 when Thomas Bamford was the licensee. It ceased being an inn during the 1930s and reverted to being Handle Hall. The 1800 Turnpike Act mentions ‘A certain dwelling house now used as a public house at Doghills’. In 1818 the landlord was James Lord, Victualler and Butcher. This pub known as the Bull and Butchers was later pulled down and the materials used to construct the Summit Inn (see later). 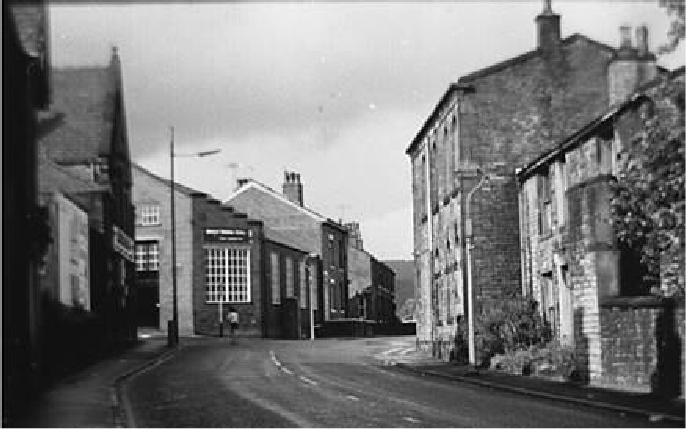 Junction between Whitelees Rd in foreground with Calderbrook Road beyond upon which the Caldermoor Pub was located (out of view). Shore Road, to left, used to be through road to Wardle and Whitworth

Also shows the earlier route via the Reddyshore Scout Gate from Doghills,