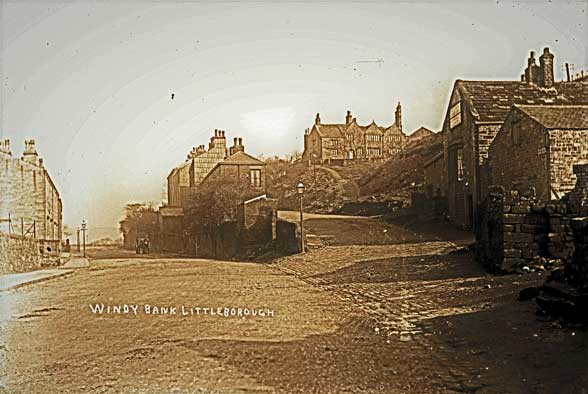 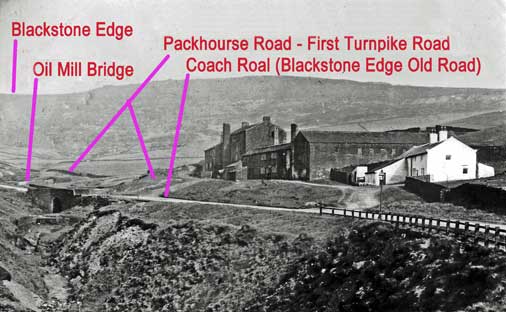 Use the Links below:

The main A58 road through Littleborough follows the Blackstone Edge Turnpike in its final form before abolition albeit with some minor changes, junction improvements etc. However, the first turnpike largely followed earlier tracks and Pack Horse Ways with the initial route from Greengate to Whitelees Road (where the later Turnpike to Todmorden joined the route) followed a slightly more southerly route much of which still exists, eg the ‘Old Road (see sketch map top right). Toll Gates were located along the route with the present names of Greengate and Whitegate suggesting their location.

During the 1770s ands 1780s, the Trust determined to undertake improvements between Hurstead and Littleborough which led to the construction  of the New Road in Dearnley (pictured right).  A new Stubley Ticket Gate was built adjacent to Watling St and New St. The new (2021) housing estate just east of New St had eradicated any trace of the old road at this point. The location of the Whitelees Gate is unclear but it was on the Littleborough side of the junction with Whitelees Road so that local traffic to/from local mills near Featherstall would not pay tolls for very short journeys.

Improvements occurred between 1780 and 1820 (see sketch plans right) which led to the construction of Church St between Morgan St and Hare Hill Road thereby avoiding the route over James Hill which exited between the Royal Oak and the Wheatsheaf. This was later used for housing in 1818. The works also included the diversion of the road to run in front of the Falcon Inn thus creating Falcon Yard where the horses were changed, coaches stabled and the barn was located. In the rear porch of the Falcon Inn is a 1657 datestone recording when the yard and stables served as the focal point for stage coach travel over Blackstone Edge. The current Holy Trinity Parish Church was built between 1815 – 1820, some 15 yards (15 metres) north of the 1471 church. .

Littleborough to The Rake Inn

The turnpike passed by Ealees Hall (occupied since 1561 and pictured right) as well as Windy Bank, Bent House etc whose residents had connections and no doubt had a connecting road or track. With the building of the railway viaduct during 1837/8 the road layout next the River Roch bridge was changed and numerous properties incl Ealees Hall were demolished.

References to tracks and road over the Edge have been recorded from as far back as the Doomsday book in 1070 and included references to Richard Wood in 1285 complaining  to the Sowerby Constables over the bad state of the road across "Blackesteynegge". Similar comments continued over the years. However, traffic over the Edge increased with Trains of Packhorses carrying goods of £1,000  in the late 17th Century. Pre turnpiking, Daniel Defoe crossed in storm during 1724.

The increased use of wheeled carts and waggons created pressure for a more easily graded route than that provided by the improved Packhorse Road. In the 1760’s following purchase of land the old Packhorse route to Gatehouse and the easier route to the west of Windy Bank constructed. Local residents at Gatehouse believe a gate was located with the tolls collected at Rough Farm. Beyond Gatehouse the road passes through a deep cutting at the summit and later crosses an embankment past Lydgate Mil and Lidiet Green cottage, both probably undertaken by the Trust.

Rough Farmhouse, (painted white in the photograph right) was where the tolls were collected. Drovers watered their animals in the clough below the bridge. The location  of the toll building suggests that the first toll road followed the Packhorse Road which runs in front of the cottages (and earlier mill) at High Peak.

The route used over Blackstone Edge by the first turnpike remains uncertain. It is suggested that the so called Roman Road was in fact the work of the Blackstone Edge Turnpike Trust as the original Packhorse Way remains in situ (and un-widened) to the west of the wide stone pavement. Both meet just below the ‘Aiggin Stone’, a way marker cross next to Blackstone Edge Summit.

Around 1760 an easier route over Blackstone Edge was constructed (referred to as the Coach Road in the picture above right) which went from Rough Farm to Stormer Bar (built 1838) via Oil Mill Bridge (in the above picture). After Stormer Bar it ran at a lower level before climbing more steeply to the Coach & Horses Once (now the White house)

The growth in coach travel led to further improvements. In 1819 lots were let for the construction of the current Halifax Road completed in 1820/1. This complemented the recently completed new road between Stormer Bar and the Coach and Horses (or White House as it was increasingly called). In 1825 the whole length of the ‘new’ road from the Rake to The Coach & Horses was complete to the satisfaction of the Inspector General of Mails (for the use by Mail Coaches). Some 6 coaches operated daily between Rochdale and Halifax – Shuffle, Perseverance, High Flier, Defiance, Duke of Leeds and Commerce.

The 1820 road (A58) takes the lower wider road beyond the Rake Inn and passes close by the 17th Century ‘Old Bent House’, Just after New Barn farm the road crosses over the Lydgate valley by an embankment constructed by the trust. Over time, the embankment has

The Moorcock Inn (above) used to be Lower Swaindrod Farm and was first licensed around 1840 with the landlord being recorded as Thomas Butterworth in 1843.

Stormer Hill Bar, formerly Toll Bar Cottage  (or Bar House) was originally constructed in 1838  with a porch provided in 1911. The Toll House was constructed where the two Toll Roads crossed as is clearly shown in the photograph (pictured right). The A58 passes alongside the Bar House with the ‘Old’ road crossing south to north on the west side of the building. Stormer Bar had a weighing machine. Both Turnpike routes combine on the approach to the White House (previously known as the Coach and Horses), another Coaching Inn pictured bottom right.