Located on a high embankment the passenger station, has undergone many changes over the years, not always in the best interest of travellers. The earliest station may have had an overall roof and probably included at some date with a ticket office under the viaduct with a stepped ramp access the ‘to Leeds’ platform. By around 1850 the Leeds platform building had been replaced and was described as being 47ft long with ticket offices and waiting rooms. In 1873/4 the existing building on the ‘to Leeds’ platform was constructed possibly incorporating parts of the earlier building and included a canopy  as shown in the picture opposite. The ticket office was reached by a ramped footpath directly off Railway Street, ie the old toll road provided by Mr Smith some 40 years earlier. In 1892 a new ticket office was built adjacent the the new subway with covered stair access to both platforms. On the Up ‘to Manchester’ platform a wooden prefabricated ladies cum general waiting room was provided together with separate gents toilet - see picture above right. Over time numerous changes were made to the passenger facilities and currently both platforms large shelter with glass screen walls and a leaky roofs. The to Leeds platform retains a heated waiting room, am only. Other changes affecting the station include a new bus turning-circle (pictured right), car park, access ramps, platform lengthening and the adoption of the main station building by the Littleborough Historical and Archaeological Society Ltd who transformed the then semi-derelict buildings into the History Centre.

There used to be 8 coal drops (for use by local coal merchants) located off Canal St but all trace s of them have now gone.

Goods facilities have developed over the years with coal being one of the most important commodity. The 1851 OS map shows a large building on the goods yard site but few other details. However, in 1875 a replacement goods depot building was provided perhaps prompted to the growing number of mills in Littleborough. It was this building which required the footpath from the very opening of the railway to be diverted. The goods yard (illustrated top right)  finally closed in 1963, the site being used subsequently for the Lo Cost Supermarket in 1992 (later the Co-op).

What signalling was provided at opening and in the earlier days of operation is unclear but by 1891 there was a signal box just east of the viaduct together with an up (to Manchester) loop or siding and another signal box at the west end of the goods yard. This situation possibly lasted some 30 years but by 1908 the east signal box next to the viaduct had been replaced by a central signal box and 4 tracks had been provided. The OS maps also show how the tracks provided at the station changed over time. The 3rd platform at Littleborough was taken out of use in 1969 and later signalling was controlled by Preston Power Box with Littleborough Station signal box abolished in October 1971. 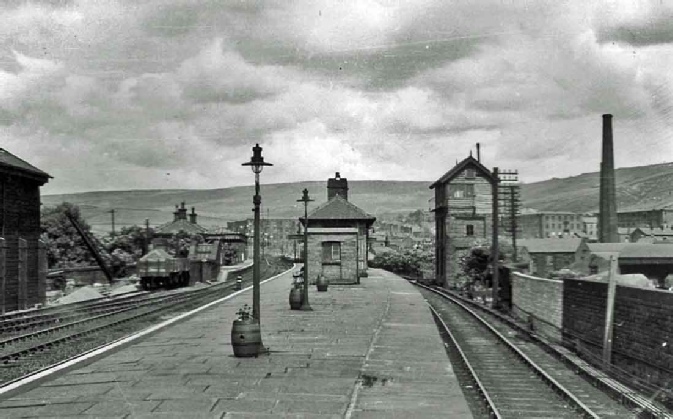 Below) Photograph of Littleborough Station from Cleggswood Hill. The canopy has been removed from the ‘to Leeds’ platform and the Signal Box has been demolished as has the Goods Shed. Lo Cost has not yet been built’. Refurbished DMU in earlier livery style at ‘to Manchester’ platform. 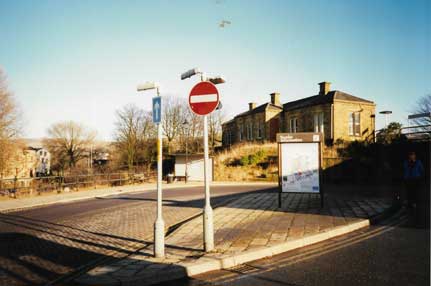