The Rochdale Canal is a broad canal, 14 feet in width running for some 32 miles (51 km) between Castlefield basin in Manchester (where it connects with the Duke of Bridgewater’s Canal) and Sowerby Bridge (where it connects with the Calder Navigation). The canal reaches a height of 600 feet at its Summit and is heavily locked with originally 92 locks. The busiest section of the canal was in Manchester between the Castlefield Basin and Dale Street, junction with the Ashton Canal.

The canal through Littleborough

Links to other pages

In 1766 a group of local Gentlemen commissioned a survey by John Brindley for a canal. His proposals were for a narrow canal including a Tunnel at Summit. Due to opposition, this early proposal was abandoned.

Some 25 years later, a new group appointed John Rennie FRSE as Engineer with William Crossley, (a local surveyor from Brighouse) to draw up the plans for a Rochdale Canal from Manchester to Sowerby Bridge. A Map of land ownership in 1793 included two proposed reservoirs at Hollingworth. The Committee of the group approached William Jessop who in February 1794 produced his assessment of the Rochdale Canal and advised that it should build as many reservoirs on the moors at Blackstone Edge as the “company of Proprietors shall think proper”. Jessop's advice and his Parliamentary skills led to the 3rd Bill becoming the Rochdale Canal Act on 4th April 1794.

On 17th June 1794 Jessop submitted a report with detailed proposal for building canal with innovative ideas including standardised 10 ft rise locks to minimise waste water and a new ¾ mile long Summit Pound which would be in a 30 ft deep cutting (actually 40 ft) and the depth of water 2 ft deeper to help maintain navigation. Construction of the canal commenced later that year. In 1797 a report to the proprietors indicated "two thirds of (construction) work done" and in August 1798 the Rochdale Canal opened between Sowerby Bridge & Todmorden. In December 1798 the canal opened through Littleborough to Rochdale and by 1799 the canal was opened to Manchester. Finally, on 21st December 1804 the Rochdale Canal opened throughout at a cost in the order of Cost of £500,000.

The Rochdale Canal Company required extensive water storage and eventually built 5 on Blackstone Edge including Whiteholme, Warland, Light Hazzles and Blackstone Edge Reservoirs, Upper & Lower Chelburn and Hollingworth Lake. The latter required a feeder canal and associated pump house to deliver water to the Summit Pound. In in the early days of the canal authorisation was given to increase the capacity of reservoirs by raising dams etc.

The canal through Littleborough

The Littleborough section starts from the swing bridge just west of just west of Warland Upper Lock (No 35) in West Yorkshire to the Swing Bridge at Upper Clegg. Long Lees (Lock 36) and The Summit Inn (Lock 37) are located at the east and west ends of the near 1 ½ mile long Summit Gap, a Glacial Drainage Channel in which the Rivers Calder and Roch rise. Summit Gap and the surrounding hillsides have long been important transport routes with the canal being a key driver in their later development as well as Littleborough and its industry. Beyond Rock Nook the Valley increasingly opens out offering vistas to the surrounding hills where the reservoirs are located.

Including the locks at either end of the Summit Pound, there used to be 12 locks but one at Rock Nook was avoided when the canal was reconstructed. There are still some textile factories at Rock Nook and Green Vale but the Chemical Industries at Long Lees, Cleggswood (Akzo) & Smithy Bridge, Brick & Tile Industries at Summit, Rock Nook and Smithy Bridge have long gone as have the Mills near Durn, Brookfield and in Smithy Bridge (and Clegg Hall) as well as Schofield’s Foundry,many of which are detailed in this website or in our booklets

Swing Bridge No 55 at Little Clegg marks the western end of the canal in Littleborough but a short walk leads to the famous Clegg Hall a site dating back to the 14th Century or earlier.

The working canal served Littleborough for almost 150 years as shown by the traffic details right. Inevitably, stoppages did occur where nature affected navigation through either drought or ice. Happily, the canal has returned to navigation and remains well used for cycling, walking and fishing. 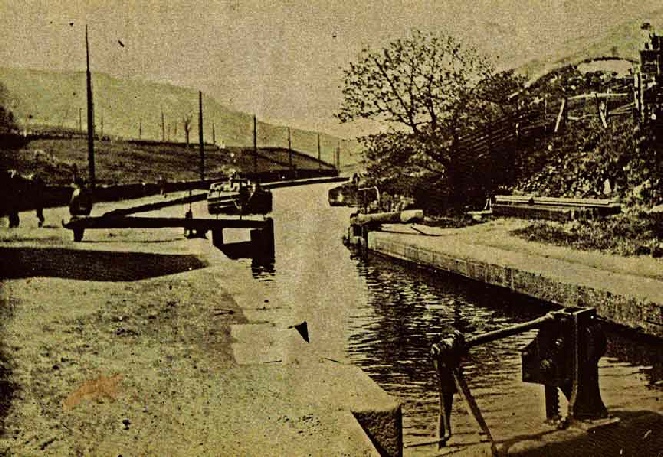 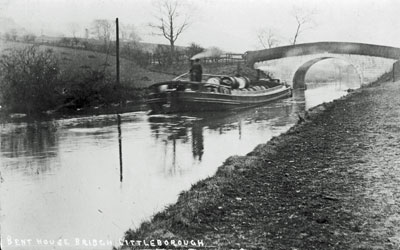 1930 Little of through workings on Canal

1937 last two boats traversed the canal from end to end