THE HOLLINGWORTH TO RAKEWOOD TOLL ROAD

Around 1818 James Wild constructed a toll road for Messrs Midgeley and Rhodes which ran from the weir (approx where the Wine Press is) to the bottom of Hollingworth Brow (now called Bear Hill). This superseded a foot-road. Messrs Midgeley and Rhodes paid the Canal Co £1 pa for the privilege of taking the road over the dam. The road was extended at the same time to Rakewood. The tolls were collected for a number of years before the road fell into dis-repair so it was taken over by the Canal Co circa 1836. John Taylor of Higher Fold collected the Tolls on behalf of the Canal Co from 1840 or 41. Toll collection was not strictly enforced as when the toll keeper was absent none was collected. Henry Blackburn from Milnrow recalled that when travelling during the period 1842 to 1847 the toll bar or chain was located at the bottom of Hollingworth Brow where two gas retorts remain. Mr Blackburn stated that whilst tolls were paid to visit the Lodge Inn (now houses) none were paid to reach the Mermaid Inn (now demolished). On 13th April 1892, by agreement with the Proprietors of the Rochdale Canal Co, Littleborough UDC advised that “This road is open to the public” subject to various conditions including weight limits, no stopping on the dam and restrictions to ensure animals did not stray or pedestrians do not go onto the slopes of the embankment.

Circa 1831 or 1832 a Mr Smith speculatively built a toll road from opposite the Falcon Inn across the river Roach, and forward to Ben Healey Bridge (the canal bridge) and thence to Hollingworth Lake bank, putting a toll bar at the Falcon Inn end See plan below and here. Later Mr Johnstone Head, constable, of Rochdale, erected two lime kilns (with separate access road) near the canal bridge, and commenced to burn stone, which was brought to the place in boats - see plan below. Whether prior knowledge enabled Messrs Smith and Johnstone to gain material compensation for their losses is now uncertain but just a few years later the surveyors for the Manchester and Leeds Railway duly arrived and preparations began for making the line”. With the coming of the railway the toll road was severed but the footpath remained as a reputed ‘Right of Way’. The 1851 OS Map shows the road from Hollingworth Lake to Littleborough Station but earlier it left the Falcon and went directly to Ben Healey Bridge over the Rochdale Canal adjacent to the Railway Hotel. The road continued beyond the bridge to Hollingworth Lake. When the railway was built the road to Littleborough was severed but it is unclear is how traffic from Hollingworth Lake to Littleborough was meant to reach Littleborough via the Blackstone Edge Turnpike. The Toll Road to Hollingworth Lake was adopted by the Littleborough Local Board in 1882 Littleborough Square was completed in 1888.

In 1801 a  Mr Entwistle built at his own (considerable) expense a private road for horses and carriages for use of his tenants only through his farms in Hundersfield and Butterworth commencing at Smallbridge and ending at the Highway at Winnian or Union Flash in the Butterworth. Mr Entwistle believed the road would be of value to other users, particularly as it crossed over the Canal at Clegg Hall where wharfs and kilns could be built to produce considerable profit. He intended to hold a meeting in the Bull Hotel, Smallbridge on the 12th November. He also issued a Public Notice is also further given “That as the said road is cut and made entirely through Private Property – ‘All Persons presuming to go or to travel the same without leave or by Agreement in Writing or paying a toll as required at the Toll Houses (Foot Passengers excepted) will be prosecuted with the utmost severity of the Law’, John Entwistle, Foxholes, Oct 13th, 1801”.

The road between Clegg Hall and Little Clegg was known locally as Mr Entwistle’s Road and originally extended beyond Bellfield Mill to Newbarn on Milnrow Road over land marked on the 1786 map as XX Entwistle Esq., presumably the same Mr Entwistle. The link to Smallbridge thus being an extension to the earlier network of private roads. The stretch of the old road from Clegg Hall to the River Beale at Bellfield Mill is still extent but now an unused green lane.  Branch Road farm (known as Branch Royd farm in a 17th Century Manorial Survey) was connected to Milnrow Road and Belfield etc by a number of minor tracks. It may well be that Branch Road (to Wildhouse Lane) may also have been built by Mr Entwistle to connect his network of roads. The Rochdale Canal Co late in 1801 built the Shawmoss Tunnel under Milnrow Road to ‘Winning Flash’ which is believed to have been located near to Branch Road Farm. The tunnel outlet was later extended to provide water to Clegg Hall Mill Lodge.

TRACKS AND ROADS AROUND HOLLINGWORTH LAKE

In addition to the Hollingworth and Rakewood Toll Road, the Rochdale Canal had a number of gates situated around Hollingworth Lake (The Weavers Seaport) which were locked for a day each year. In April 1953, H Percival recalls some 6 gates located:

1. near the Beach Hotel;

2. opposite the landing stage;

3. corner of road to Littleborough;

4. near road to Higher Cleggswood;

5. next to Bear Hill House;

Elsewhere it is stated that "The Toll House, a wooden house, was near to the Fisherman's Inn on corner of the road to Littleborough and Smithy Bridge operated by Mr Jackson and closed on 14th April 1892". - See below. Another note suggested it was moved to the Lake Hotel. The Rochdale Canal Co also erected a brass plaque ‘in the road’ between Yell Lane and the first house (built on the site of the old L&Y Hotel) “RGC – NO RIGHT OF WAY- NORTH WEST OF BOUNDARY STONES – FIXED IN LINE 41 YDS – SOUTH WEST OF THIS POINT”. 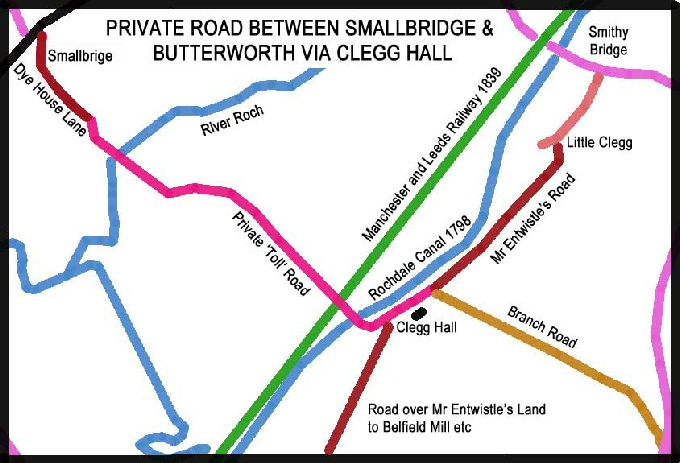 OTHER TOLL ROADS AROUND HOLLINGWORTH, THE LAKE AND LITTLEBOROUGH