Details of Rochdale Canal in Littleborough

Bottoms in West Yorkshire (Lock 33) and The Summit Inn (Lock 37) are located at the east and west ends of the near 1 ½ mile long Summit Gap, a Glacial Drainage Channel in which the Rivers Calder and Roch rise. Summit Gap and the surrounding hillsides have long been important transport routes with the canal being a key driver in their later development as well as Littleborough and its industry. Beyond Rock Nook the Valley increasingly opens out offering vistas to the surrounding hills where the reservoirs are located.

The canal in Littleborough starts at Warland Swing Bridge and rises to the Summit Pound at Longlees Lock 36 passing through a largely rural area once containing numerous Chemical Works (see picture right). Towards Summit the canal passes through an artificial cutting with houses and bungalows above the towpath. Just before West Summit Lock 37, exiting through the opposite bank is the partially silted-up tunnel mouth of the feeder canal which brought water from Hollingworth Lake plus a feed from Chelburn Reservoir, itself fed from Blackstone Edge. Adjacent is the lock keepers house and Bridge 42 and up the short road is The ‘Summit’ Inn, opened circa 1824. Across Bridge 42 used to be located Summit Brickworks. Also visible is the River Roch as it siphons under the canal.

The Brickworks dock remains in the next pound and later, over to the left are the scars of quarrying for clay. Adjacent to Lock 39 used to be Tetlow’ Brick & Tile works. Also adjacent is Sladen Wood Mill, the first mill operated by the famed Fothergill & Harveys Company. It was constructed on reclaimed land and the River Roch runs in a conduit beneath the mill. It then crosses the now adjacent railway by a cast iron bridge. The adjacent Punchbowl Canal Bridge has been widened and the old canal dock, previously located in front of Sladen Wood Mill, was infilled circa 1960s to create the present car park. This used to cover part of the canal but that section was removed to enable the canal to be re-opened. The adjacent lock (there were previously 2 locks here) has hidden pounds which help manage water supplies.

From 1859 Fothergill and Harvey gradually expanded their company building more mills in Rock Nook. Take over by Courtalds in the 1980’s led to decline but more recently, Fothergill Engineering Fabrics acquired most Rock Nook mills (except the empty tall one) and now produce a whole range of man-made fibres, using all the latest technologies. The F&H complex is shown in the picture opposite and is close to Lock 43.

Lock 44 is adjacent to Green Vale Mill and just beyond the canal crosses a tributary of the River Roch. This passed through Lydgate Clough and was for some years fed the Canal Drain. Beyond the bridge are the remains of Pikehouse Mill, the cottages remain adjacent to Pike House Lock and Bridge 45. Early maps provide no clues as to why the bridge was provided although the footpath to the bridge under the railway may suggest trade across Gale Flats before the railway was built in the mid/late 1830s. In 2021 work was undertaken to create a flood reservoir on part of Gale Flats. The canal follows the contour of the hillside and creates a wide expanse of water. This provides a greater head of water as well as an easy location to turn barges. The next bridge is Bent House Bridge 46 which once provided a direct link between Bent House (which dates from the 16th Century) plus possible coal mines in the area to Todmorden Road at Gale.

Adjacent to Lock 46 and Windy Bank Bridge 47 is a small dock or wharf used for loading barges with stone from Blackstone Edge. The replacement wooden post for an old hoist is adjacent. The modern building in the next pound replaced a much older structure used by Littleborough UDC before its abolition. Beyond is the site of Durn Foundry where Job Cogswell, a local canal carrier, had a wharf . The new housing estate alongside the towpath was built on the site of Frankfort Mill (opened in 1860 and demolished around 1950). The site was for many years operated by Green Bros, vehicle dismantlers. Durn Bridge carries Halifax Road. This was the Blackstone Edge Turnpike, the first through Littleborough opened in the 1730s to link Rochdale to Elland and Halifax. Just beyond Durn Bridge the small garage is located on the site of Uber Mill which burnt down in 1916.  Before the next bridge are more concrete houses. Bridge, No 48 demonstrates how years of wear by barge tow ropes create grooves in the bridge corners. Lock 48 with its well-maintained old lock house, is the last one for nearly 3 miles. Close by is the site of the Littleborough Wharf (also see). For many years during the 1870s the local council was in dispute with the railway and canal companies about who owned the section of road to the next Bridge 49  and was thus responsible  for its maintenance.

The current Bridge 49 was built as part of the Canal restoration and replaced the culverted structure which itself had replaced the original very narrow Ben Healey Bridge (pictured opposite). Close by was a wharf which served Cleggswood Colliery. Coking ovens were located by the road and canal and much of the output was transported to Hall & Rodgers works at Smithy Bridge

Before the next stone Bridge 52, near to Brown Bank, used to be located Akzo Nobel Chemical Works. The site had a long history in the production of chemicals. Between Bridge 52 and Brown Lodge Bridge 53 the canal again closely follows the hillside. Beyond Bridge 53 is Paragon Works, the site of the Smithy Bridge Rail Disaster and now used by the motor trade. It was previously used to store rubber sheets and earlier it was a Chemical Works. The canal follows the contours as it passes under the Smithy Bridge Road. Once again, the original narrow canal bridge was replaced by a culvert which itself was replaced by the new wider road bridge dating from around year 2,000. On the side opposite to the towpath was located Hall and Rodgers Brick works and beyond that, where the modern housing is, was the site of New Broadfield Mill. Swing Bridge 55 at Little Clegg marks the western end of the canal in Littleborough but a short walk leads to the famous Clegg Hall a site dating back to the 14th Century or earlier. 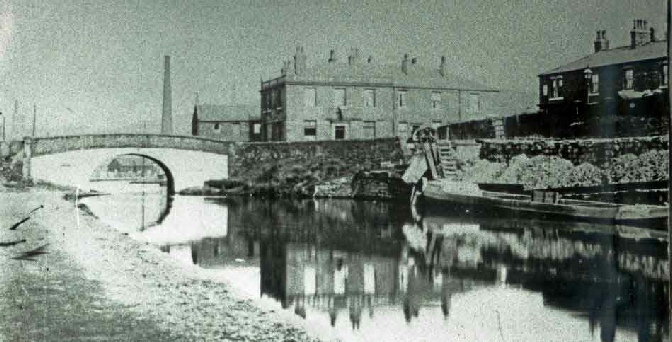 The canal feeder (or drain) went from the Engine House, located just past the last cottage on Bear Hill and followed the contour to Brearley farm and thence to Syke at which point it curved sharply to go through Whittaker Wood (pictured below) and thence the fields below Whittaker Hamlet. It passed through Ealees Wood before crossing an aqueduct to enter Owlet Hall Tunnel. Much of the route on this section can be followed although there is no direct footpath access into Ealees wood close by the feeder. The canal feeder exited Owlet Hall Tunnel in Lydgate Clough where it curved across the stream and is joined by a leat from Lydgate Brook before going through the culvert under the A58. Beyond the road, the canal feeder goes up a small valley, aqueducts over the stream and curves back around the opposite hillside and then clings to the hillside high up Sladen Valley. It curves around and under the roads to Sladen and Timbercliff before approaching the main canal next to the site of Tetlow’s works. Part of the route is difficult to follow but the feeder canal can be seen.