Ton House is the earliest known settlement circa 970 AD (Anglo-Saxon era), near 100 years before the Normal Conquest.Ton House is thus earlier than Clegg Hall built by Bernulf de Clegg in the 11/12th Centuries and mention of Lightowlers, Shore, Stubley, Whittaker and Windy Bank in the late 13th Century. Also, Ton House was near 500 years before the building of the first Parish Church 1471.

The residing family were as “of the Ton”, eg William of the Ton in 1223. This continued until 1281 when the Kyrkechagh (Kershaw) family took residence. In 1452 until  it came into the possession of the Newall’s through marriage. Town House, as it became known, was rebuilt or a new building was built on an adjacent plot in 1292 and further rebuilt in 1604 with further alterations incorporated over the years.

The 17th Century saw an increase in the number of homes and farms being built including Pike and Bent House and closer by Upper Town House in the tenure of Alexander Kershaw (Yeoman) in 1626 and farms at Mawrode (between Calderbrook & Summit) in 1503 and Whitfield in 1579.

Town House Warehouse now called Mill) was built mid-18th C in front of the mill. It started as an unheated two storey warehouse with a tacking in door on the top floor (now a smaller window) but in the early 19th C, the larger 3 storey warehouse was built on the right hand end and later the original two storey structure was increased to 3 storeys. Later still, stables were added on the east end and a Cottage built on the western end.

Around 1990 Townhouse Warehouse was reviewed as a Building at Risk during which it was found to be “in poor condition, not sufficiently weatherproofed and deteriorating significantly in places, Windows not sealed and doors at all levels in poor condition. Cottage chimney stack and stack on Mill (ie Warehouse) look dangerous”.  The review also found side buildings in poor condition but the rear of the building was in better condition. In 1992 the Royal Commission on the Historic Monuments of England produced a report on Town House Mill which noted that it was not a mill, that was to the rear of the property, and that it was built in varying stages during the 18th and 19th Centuries. A further Building at Risk review in March 1994 found that the buildings had suffered further deterioration with scaffolding in place for support. It also noted that work was in hand to restore the property by its owner. The property was subsequently converted into 3 individual properties (or 4 including the Cottage on the left hand end). 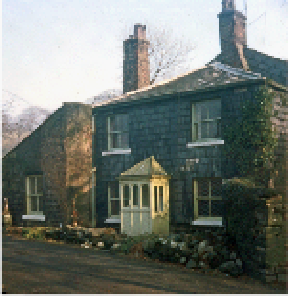 The growth in population and hand loom weavers increased the need for the wool processing. Townhouse Mill (now demolished) probably started life as a water powered Fulling mill or corn mill. Its build date is uncertain but the date stone built into the present Town House Warehouse property – LNS 1732 (some read it as 1752) may have come from the mill. The mill may  have expanded into spinning wool for the hand loom weavers. In 1827 steam was introduced to a 4 storey mill at town house (likely to refer to this mill to rather than the later Croft Head Mill on Calderbrook Rd (see later). The actual mill  had been demolished by 1890 (no doubt uneconomic)

In 1911 Gordon Harvey purchased Town House and together with his brother Ernst they rebuilt Town House to create two large houses linked by a connecting door so that the brothers could meet up to discuss their business interests etc.

Town House itself was also reviewed in 1994 when it was found to be in good condition and not at risk. It recorded it owned by Mr & Mrs Howarth, being in domestic use and converted into individual flats (apartments). B&W photographs accompanying the review showed previous movement in the Pedestal’s stonework topping the south face. This is still visible in 2020 with the Ivy pictured in 1994 now covering more of that frontage.

In the mid-19th Century, Town House Cottage was built on the left hand end of the warehouse with its frontage looking west. It later became known as Bowden’s House. It is pictured left as it looked circa 1960/70. In 2020 the cottage is almost hidden by surrounding vegetation

An early mention of Croft Head Mill (pictured in later days) was “Benjamin and Joseph Schofield, Fustian (Cotton) Manufacturers, Town House Mill” was in 1845. It is believed that this referred to Croft Head mill as it was included on the 1851 OS Map with the note that it had a Gas Holder. In 1852 the mill was in the possession of Joseph Schofield & Co,  Cotton Spinners. Later, in 1878 there was a fatal accident resulting in the death of Martha Hannah Hudson. In 1891 the mill was ‘destroyed’ by fire but was completely rebuilt at a cost of £5,000.

Croft Head Mill  ceased processing cotton and during WW2 (owned by Messrs Frederick Scottand Sons of Gale Print Works) it was used by "The International Transport Agency Ltd" based in Manchester for the storage of Cotton Waste for the 'Cotton Control Board'.

It was later occupied by Ambores Ltd, Metal Processes and later still by a furniture manufacture before finally being demolished and replaced by housing.

In 1828 the death of Lawrence Newall meant that his 3 daughters came to possess Upper Town House, Town House and Gale; Town House. Sarah who married George M F Molesworth , became the owner Of Town House whereas Mary inherited Gale House. As George was a Lieutenant in the Royal Navy he and Sarah left for Portsmouth before moving to North Devon. Mary wed John Molesworth, Solicitor and County Coroner. With the departure Mary and John came to live in Town House which remained in her possession until at least 1893.

Circa 1850 some mining occurred at the bottom of Town House Wood, which may well have lasted for just a few years.